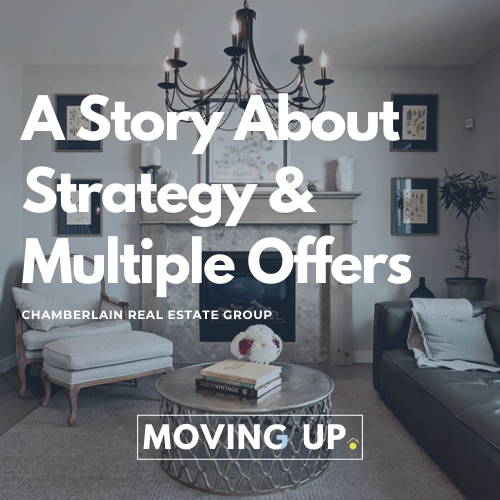 Matt Antrum has a fantastic story about a long-term friend and client. They've known each other for about fifteen years.

They've done five transactions together, and he helped them buy their first home.

They have bought and sold a couple of times. Some have been good, and some have not been so good. They had hurdles to get through.

We will tell you a story about one of the transactions they did where they had to overcome a multiple offer situation.

Having a Strategy from the Beginning

Matt met with the client and his wife. They talked about their goals in the next five to ten years and how to get there. The key to getting from point A to point B is selling their current house.

Matt did reverse engineering in creating a strategy.

When selling and buying a home, you have to reverse engineer the whole process. One thing to consider is resale value. When you're going to plan to buy a house, think about what it will sell for. That's very important.

For his client's first purchase, the strategy was not only to find the right house for them. They also made sure that they could sell the house regardless of what the market's doing in four to five years.

As planned, five years later, they listed the house with the help of Matt. It was vital for them to get that house sold before moving on to the next place to have their mortgage in order.

Matt got their house sold. The next step of the plan was to get out there and find their next home.

They knew what they wanted. The couple knew the price range that they can afford within the community they want.

We looked at new builds and found the perfect house for them. They had everything they were looking for; the location, the bells, and whistles.

They knew it was something that they could grow into with their family. It was already pre-built, so it offered a flexible possession. It was great because we were able to time the possession with the sale of their home.

We negotiated back and forth, and we got a verbal agreement. Everybody was pleased. The next step was to get it in writing. It's not an official deal until it's in writing.

We started doing all the paperwork and submitted it back to the builder so they could sign off. We have a conditional sale during that time.

We had the offer and sent it back to the builder.

Then, another offer sneaks in.

It was tough to break the bad news to the clients. They were already excited to buy their dream house.

They were devastated, but that is it. That is how it goes. If it's a verbal deal, it's not an official conditional sale until it is all in writing.

Now, the mindset has to shift. Initially, the buyer went in ready to write an offer, and now they're competing. We're now in a multiple offer situation. The buyer has to come up with a new strategy.

They need to come with their best foot forward. They need to decide much they are willing to put into this home in terms of price.

At that time, the buyer was from a very emotional place. They weren't willing to move.

Unfortunately, we lost the property. After all, the builder chose the other buyer.

Preparing yourself for a multiple offer is a much different process than just planning on negotiating.

A multiple offer situation is when multiple buyers are bidding on a single property.
The seller takes all the offers and chooses the best one that will work for them.

Typically most sellers in any market are tied to price. Buyers have to identify what's the top price that they are willing to pay.

A seller has options at this point.

When we're listing homes, our goal is always to get a multiple offer situation. Being on the other side of that, from a buyer's perspective, is not easy. It's emotional.

You need to make a quick decision, and you need to be able to walk away knowing that you put your best foot forward and move on if it's not successful.

But if it is successful, buyers can now proceed with the purchase of the property.

There is Always Something

Matt's clients back in 2015 did lose that house, but they found another one. They found an even better home with a better neighbourhood and a better price.

In the end, the moral of the story is if you lose out on a multiple offer, there's always another house around the corner.

Don't be attached to that house you lost because you won't find that house again. But there will be something that will be equally as good or even better.