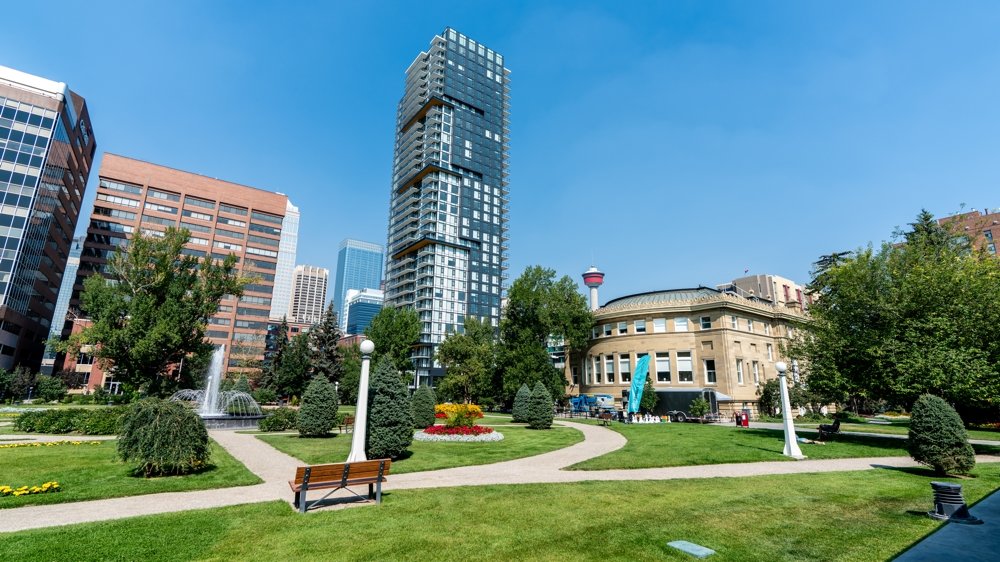 Find the newest Downtown Commercial homes for sale below.

A city is a city, no matter in the world it is, but there’s something different about the Downtown Commercial Core. Real estate in Calgary is usually defined by quiet suburbs, leafy green spaces with children playing. But this community is like no other community in Calgary.

The atmosphere is vibrant, rich, and full of life. It’s not so much residential as a commercial area first and foremost with some apartments mixed in as well. The apartments in the commercial core feel close to the action and very much a part of the heart of Calgary. In one of the densest communities in all of Western Canada, the Downtown Commercial Core still feels like a person can have their own space, their own piece of the action. That’s what it feels like to live here.

Homes For Sale In Downtown Commercial

The community of the Downtown Commercial Core of Calgary is defined by where it is. Within the community is street after street of skyscrapers. Many of these buildings are among the tallest in Western Canada, and some of the country itself. These closely-packed buildings hold offices, businesses, and entire corporations. They also hold a significant portion of the population of Calgary. The community is sectioned off, sequestered by 3rd Ave to 9th Ave and 9th St SW to 3rd St SE. Within this section of Calgary are several homes in the Downtown Commercial Core.

The community has been counted to have 9000 residents who call this their home. Many of these apartments are small single-bedroom apartments, ideal for the young professional with a career in the downtown area. There are 8600 apartments in Calgary and just a handful of small townhomes on the outskirts of the core. 43% of these residents are first-generation Canadians, landed immigrants starting out a new life in Canada. Although the majority of the population are young and single, there are a few families who call this their home.

The Downtown Commercial Core does not have a community association due to its overwhelming business and commercial district. Many of the residents do take part in the many activities to be found in the downtown core, although these activities are designed to serve the entire city.

The Downtown Commercial Core is literally overrun with amenities. That’s one of the driving forces for people living here. The homes may be close-quartered, but it’s impossible to pass up all that there is to see and do downtown. The community has first-hand access to the Calgary Transit along 7th Ave. The C-Train has 118 km of track and serves 100 million riders annually. Commuters who wish to leave the city can easily hop aboard one of the trains to quickly get anywhere else in the city.

The downtown area, although very densely populated with buildings does have several parks for the residents to enjoy. One of the biggest is Prince’s Island Park, a popular destination for lunch breaks, weekends, and holidays. This large park on an island in the Bow River has playgrounds, a café, and hosts the yearly Shakespeare By The Bow. Another population destination in winter is Olympic Plaza, the location for the medal ceremonies during the Calgary 1988 Winter Olympics. The plaza has skating on the rink during the winter. It’s the only refrigerated outdoor ice surface in the entire city.

There are several buildings within the Downtown Commercial Core that hold attractions for residents. To access them, Calgarians use the extensive “+15” system, a walkway that joins over 18 km of elevated walkways, connecting many of the buildings without the need to go outside. The attractions include Glenbow Museum, the Core Shopping Centre, Devonian Gardens, and the world-famous Calgary Tower. These don’t include the dozens of unique restaurant options, the specialty stores, the experiences only found in downtown Calgary.

There are a few schools close by, and students don’t have to travel too far to access some of the best education options in the city. The Downtown Commercial Core is close to Western Canada High School, a world-class school with advanced classes. There is also Crescent Heights High School, Queen Elizabeth School, and Sunnyside School. Most school options within the core itself are specialty schools such as art schools, language schools, or technology institutes.

Western Canada High School is currently ranking in the top 20 schools of the entire province, due to its IB (International Baccalaureate) program. Crescent Heights is also a very good high school, ranking in the top 50 schools within the past 5 years.