Home
Blog
Moving To Calgary Story Of Brian And Gloria 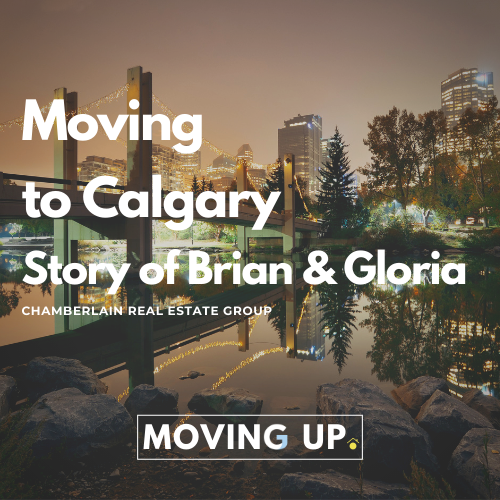 They lived on Vancouver Island in Campbell River for 20 years. In September of 2020, they made a big transition to move to Calgary to be closer to their family.

Their children are now adults with their own families. They have one child in Edmonton, one in Calgary, and one in Lethbridge. They have a total of four grandchildren now!

After two long years, Gloria convinced Brian to move to Calgary. She was very excited to be with their kids and grandkids finally.

This meant that Brian had to retire and give up his office. But because of technology and how we do business now, his clients still contacted him after moving. This allowed him to continue his business virtually.

Gloria first came to the Chamberlain office to meet with Rebecca, and they immediately hit it off! They looked at a few places and created a shortlist.

The couple figured they wanted a home in Okotoks. Our team member, Amanda Henwood, resides there and knows that community so well, which is why she was able to help them effectively.

Brian appreciated Amanda’s dedication to helping them. The couple laid out their bucket list and discussed everything they wanted in a home.

Amanda presented a list of homes for them and organized everything to make the viewings easy. After a couple of meetings and showings, they finally found their new home!

They didn't want to travel very far to visit their daughter, who lives in Douglasdale, so they ended up finding a home in Copperfield, which is about 10 minutes away from her house. It is a great part of the city with access to lots of amenities.

The interesting part of this story is before they bought the house, Gloria wanted another home which they almost bought. Since she loves hosting family gatherings, she wanted to have ample living space and a big kitchen.

They found a house with the perfect layout, but everything was done in pine; ceilings, floors, cupboards, countertops, etc. Brian wasn’t so keen on it because he didn’t want to spend his retirement years fixing every detail of the house.

They went through with the purchase of the home in Copperfield instead of the house made of pine, but soon after, a hailstorm caused major damage to the area. A contractor needed to be called, and Amanda connected them to Jonathan Lang of Sean Green’s Office, Summit Legal Group, to help them move forward with the situation.

On the day of possession, Amanda talked to Jonathan as she had noticed that Gloria and Brian no longer seemed excited about their move due to everything they were dealing with because of the hail.

They worked until 10 o'clock that night to resolve the ordeal. Real estate negotiations are hard, especially in situations like this. That’s why it is crucial to have the right people to help you create the best strategy.

Brian and Gloria were so grateful when they finally moved into their new house in Copperfield after all that happened. They appreciated Amanda’s dedication and everything she did with the team to make it happen.

If you are also planning on making a move, we are here to help you create a strategy and find the best deal for you in the current market. You can reach out to us at info@chamberlaingroup.ca, and we’d be happy to have a virtual coffee with you.