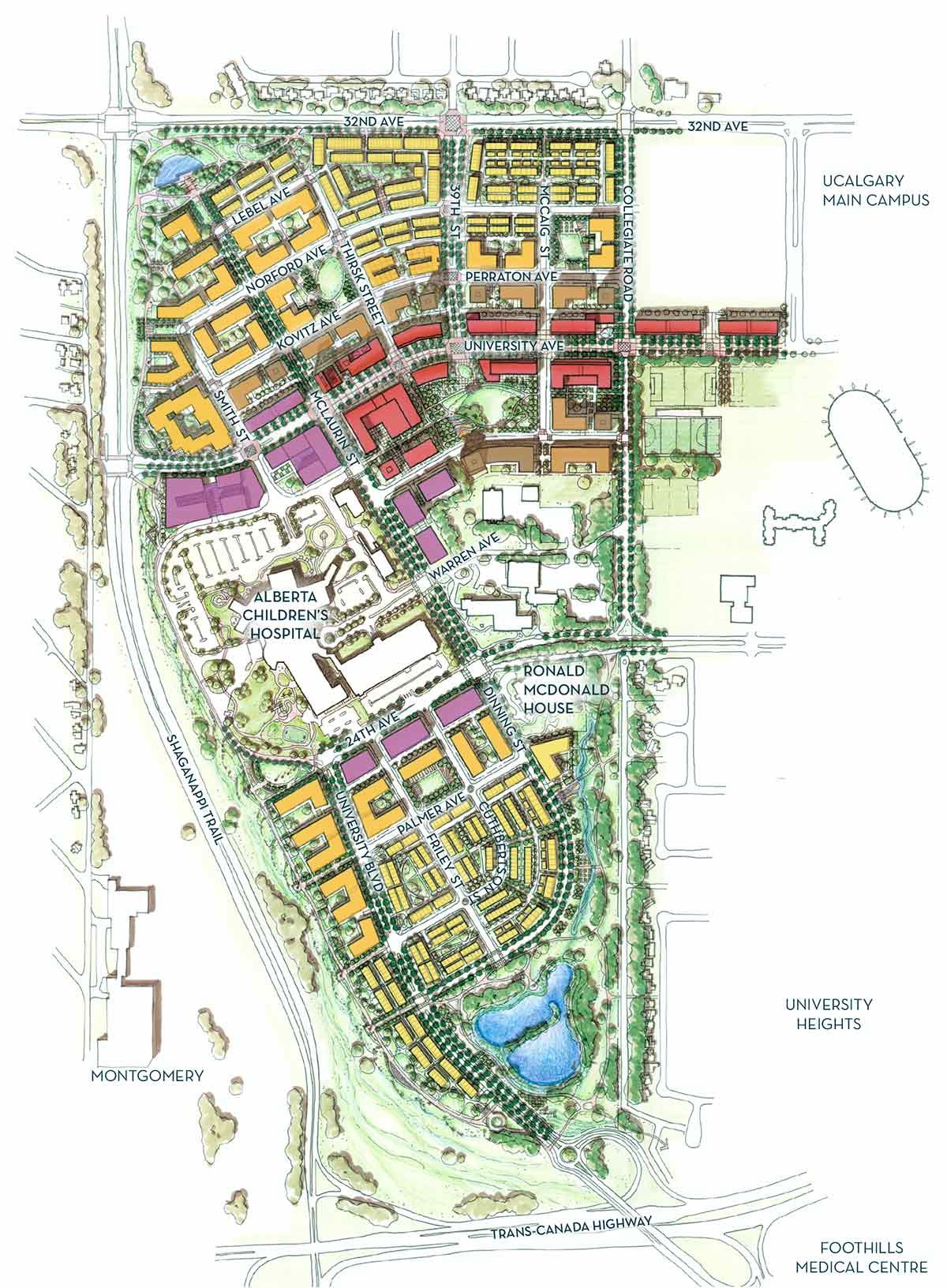 Find the newest University District homes for sale below.

The neighbourhood has good proximity to many of the types of amenities these students require such as good transportation, excellent shopping, and many walking pathways. This neighbourhood is unlike any other in the city and is supplying the housing needs of the undergraduates that live here.

This residential neighbourhood serves just one purpose. It is designed to accommodate the thousands of students that use the University of Calgary or serve in some capacity for the school. The neighbourhood has unique proportions and demographics not found anywhere else in the city. This distinctive demographic defines the layout of the neighbourhood and dictates the types of amenities surrounding it.

The neighbourhood surrounds the University of Calgary campus, a 200-hectare section of the city that is larger than the downtown core.  The roads surrounding it are 32nd Ave NW, Crowchild Trail NW, and Shaganappi Trail. It also slightly touches on the Trans-Canada Highway on its southern edge. The residents here are hard to encapsulate because, by their nature, they are a transient population, often living in the University District for a few months at a time. There are at any time fewer than 3000 inhabitants of the University District. Their standard income is very low, well under the Calgary average, but that’s an expected statistic for a primarily student population.

Of the approximately 850 dwellings in this neighbourhood, 100% of them are either apartments or townhouses. 0% of the population own the homes they live in, mainly as they are living in the neighbourhood only for the duration of the school year. Of those who don’t live in the private housing available, the remainder live on campus in the University dormitory.

Suffice to say, although the neighbourhood has a sole focus on education, there are a great number of amenities for the population living here. First off is the University of Calgary campus itself. Over 30,000 students are enrolled in some capacity every year at the school. As mentioned, the campus has a larger footprint than downtown Calgary and has 11 major buildings over the area.

This area includes MacEwan Hall, a popular concert venue for many bands touring through Calgary. It offers a private feel with enough seats to draw major recording artists. For smaller events, popular choices are Rozsa Centre and University Theatre.

The Olympic Oval is a training centre for many athletes. It features an Olympic speed skating rink, two hockey rinks, a full-sized fitness centre, a 400m running track, and many more programs. Athletes from all over the world train here daily because of world-class facilities.

Also in the University District neighbourhood is the world-class Alberta Children’s Hospital, a newly-built modern facility that meets the health needs of the children of Calgary.  This hospital operates 34 separate clinics across many fields of medicine and employs 150 staff dedicated solely to the research of children’s health full-time.

MacMahon Stadium is a major feature of the University District, home to the Calgary Stampeders and the University of Calgary Dinos. Nearby to the University District is the Bow River and Shouldice Athletic Park. These city parks have kilometres of walking paths and biking trails along the entire river. The park has several ball diamonds, soccer fields, and football fields for residents to use, all within walking distance.

Although the main school in the University District is the University of Calgary, there are a few schools surrounding the neighbourhood to help mature-aged students with children.  There is the Dr. Gordon Townsend School, which is a unique school primarily serving the children with severe medical needs attending the Alberta Children’s Hospital. The school offers education from Kindergarten to Grade 12 as normal school schedules are difficult with constant admissions and discharges from the hospital. Capitol Hill School is also nearby, offering Kindergarten to Grade 6 classes in English and French immersion.  Capitol Hill has ranked as high as 76th in the previous 5 years. Dr. Gordon Townsend School doesn’t qualify for ranking as it has such irregular class schedules.