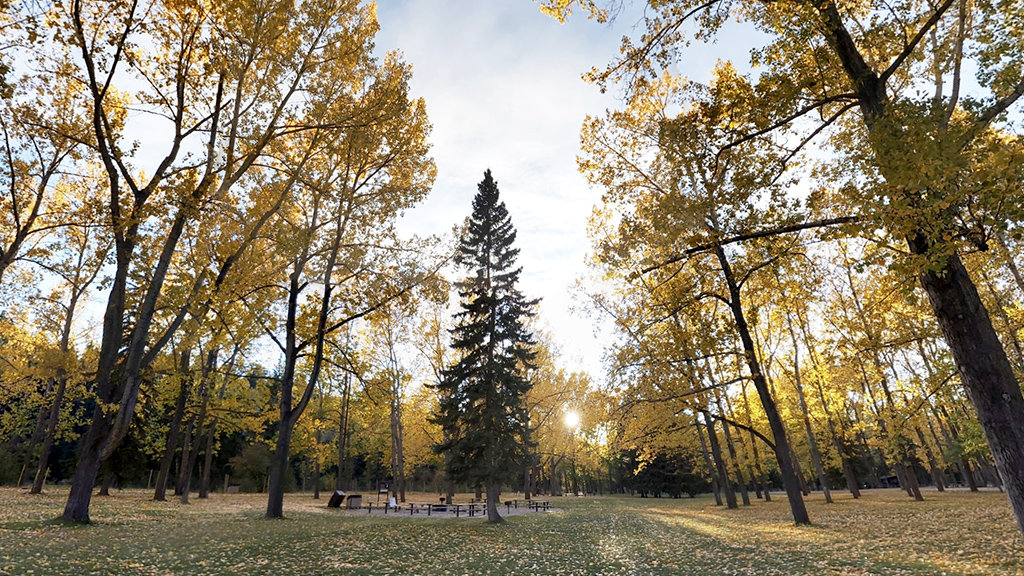 Bowness Park is one of the most versatile parks in Western Canada. It is a vast urban park on the Bow River in Bowness. It is famous for picnics and boating in summer and ice skating on the lagoon in winter.

John Hextall donated the land to the City of Calgary in 1911. It consists of two islands in the Bow River, separated from the south bank by a narrow channel.

What is there to do at Bowness Park?

Visitors go to Bowness Park because of the plentiful activities and facilities. The park has the Bowness Park playground, shelters, restrooms, bookable picnic areas, fire pits with BBQ stands and a Cafe. The river trails are suitable for strolling and are wheelchair accessible.

The University of Calgary Outdoor Centre works with the City of Calgary to operate the boathouse, train rides and skate rentals at Bowness Park. Boats are available for rent on the lagoon at the Bowness Ice Skating Rink/Lake. During the winter months, ice bikes are available for rent from the Bowness Park Skate Shop. Visitors can rent adult and children-sized bikes, and helmets are mandatory for those under 18.

The Bowness Park mini train opened in the early 1950s but shut down in 2013 because of heavy flooding damage. The park administration eventually got a new train after subsequently repairing the track. It reopened in 2016 and has been operating seasonally since.

The newest addition to the attractions here is the 1.6-kilometre Bowness skating trail with rentable ice bikes. Calgary was the first city in Canada to offer winter cycles, which are traditional bikes mounted on a sled-like platform.People can skate in the lagoon or at the new ice trail or cross country skiing in winter. You can also try out the unique ice bike experience.

The Seasons of Bowness Park is a casual fine dining experience that overlooks the lagoon. Join some friends on the sunny patio during an afternoon break, or huddle up by the fireplace during the winter months and experience dishes unlike anywhere else in the city.

On the east side of the park, there's the large Bowness Park Wading Pool that is open during the summer months, typically from 10 am till 7 pm.

How big is Bowness Park?

Bowness Park is valued as the preeminent leisure, public gathering, and recreational resort for Calgarians for over 100 years and has evolved through time with the community's needs.

The park covers approximately 30 hectares of land and has two kilometres in length. It is on the Bow River's south bank right beside the community of Bowness.

The site comprises a relatively flat and long alluvial island separated from a residential enclave via a narrow channel. People can reach it via a bridge from 48 Avenue.

Where is Bowness Park Located?

Bowness Park is located in the northwest quadrant of Calgary on the Bow River in Bowness. You can reach the park by bike, car and public transport.

The park provides free parking on-site for those who prefer to bring their cars. Commuters can take the bus routes 1, 407,40 & 305 to Bowness Park with stops within half a kilometre.