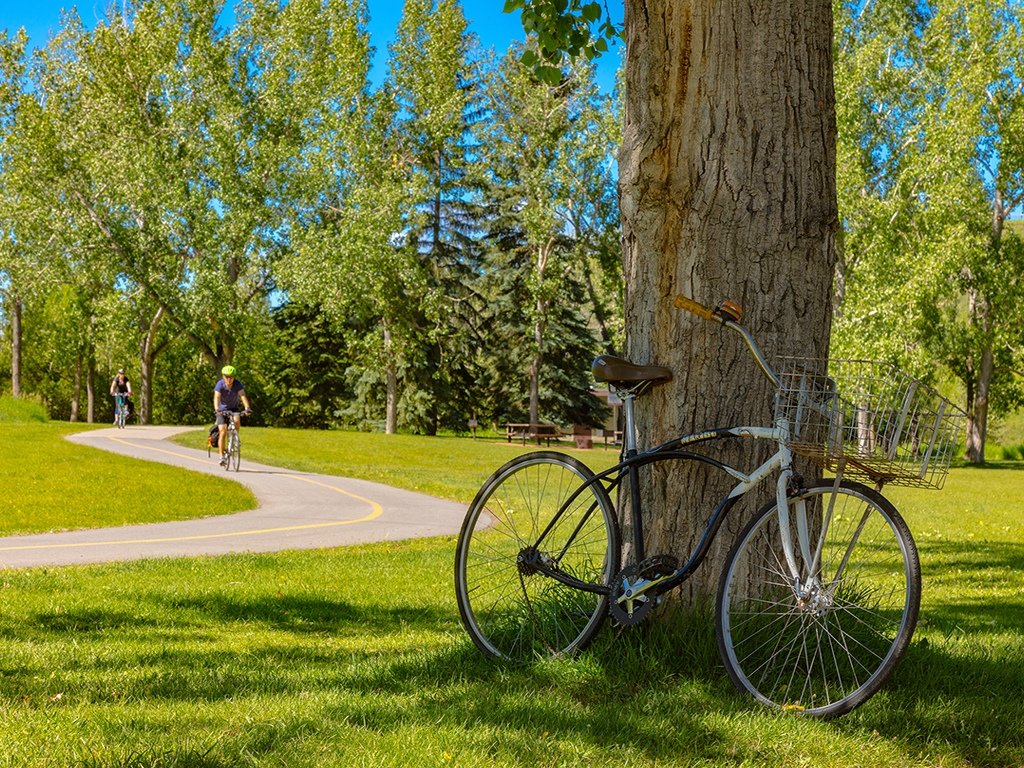 Calgary has some of the best parks in Canada, hands down. The Calgary parks that you can visit and enjoy when you live in Calgary are simply stunning. We want to show you around the 21 best parks in Calgary and help you discover something you may not know was right under your nose. After living through COVID, many Calgarians got to know their city well. Our goal is to show you some hidden treasures.

Here are the 21 Best Parks in Calgary in no particular order for you to learn more about. Most of all, make sure you get out and enjoy these parks.

Many people visit Fish Creek Park because of its natural forested condition. It houses several recreational activities throughout the year. Regardless of your age or physical ability, this park has something for you.

Sandy Beach is one of those places you just want to pick up a sandwich or coffee from a local inner-city hot spot and head down to the shores of the river for a sunny afternoon. There is so much to do and see here all surrounded by some of Calgary's hottest inner-city neighbourhoods.

Bowness Park has undergone some extensive renovations over the past couple years, and is one place you do not want to miss. Year-round, this Calgary park has something for you and the whole family to do.

Edworthy Park is a jewel of a gateway into the downtown core. Coming from anywhere in the West or NW parts of Calgary pathway systems you will most likely end up going through Edworthy. From hiking and running trails in the trees to chilling on the banks of the river, you will fall in love with this park.

Devonian Gardens is a popular downtown escape. This large botanical refuge is an indoor oasis located on the top floor of the CORE Shopping Centre.â€‹â€‹â€‹ It is a relaxing indoor garden that you will want to come back to regularly.

Riley Park is a beautiful urban park in northwest Calgary. The park contains a cricket pitch, a huge wading pool and the Senator Patrick Burns Memorial Rock Garden. Take a stroll into Kensignton for a drink or lunch and then head over to one of the most visited urban parks Calgary has to offer.

This 135 hectare urban oasis is located along the bow river. It is one of those that you may not even know you are there, but you've visited many many times before.

Prince’s Island Park is a go-to place for those who want to escape from the hustle and bustle of downtown Calgary. It is an ideal place for relaxing and people watching. Since its opening in the ’50s, it has been recognized as an urban oasis

On the northwest side of Calgary lies a welcoming area called Shouldice Park. It is a combination of a major athletic park and a relaxing neighbourhood park all in one. You can easily get to Edworthy Park to the south and Bowness Park to the north from here using the pathway systems.

Stanley Park was established in 1910. It is part of one of our oldest communities in Calgary. The park is just minutes away from Calgary’s downtown core in the South West quadrant.

Bowmont Park has some of the nicest and relaxing pathways along the river. Spend your lazy summer days tubing down slow offshoots of the river or go for a long bike ride from here and end up anywhere in the city using the pathway systems.

Pearce Estate Park is located just north and east of Inglewood. This hidden gem has some amazing urban views of the river and wildlife.

Across the river from Bowness Park is Baker Park. This park is an incredible place to enjoy the south sun and have a picnic. Golf Frisbee anyone? One of the best courses is here in Baker Park.

Established in 1959, North Glenmore Park covers the area north of the Glenmore Reservoir. From biking, cross-country skiing to anything else you want to do, you can do it here. This well visited and planned park will always leave you coming back for more.

The Inglewood Bird Sanctuary and Nature Centre have been providing migratory birds with a place to rest their wings since 1929. It is a perfect place for a short trip with the whole family.

South Glenmore Park surrounds the south side of the Glenmore Reservoir, including the Weaselhead Natural Area. It has numerous trails and pathways, tennis courts, playgrounds and the Variety Spray Park.

One of Calgary's newer parks, this is home to some great ponds, and dog parks all located at the end of Southland Drive and Deerfoot Trail.

Calgarians found a place to get in touch with nature in the middle of the city’s concretes. Nature lovers and urban explorers can marvel at the natural beauty of St. Patrick’s Island Park. After its restoration, people now dub it a wild oasis.

Nose Hill Park lies at the heart of 12 residential communities. It was officially designated as a protected area by the city in the 1980s.